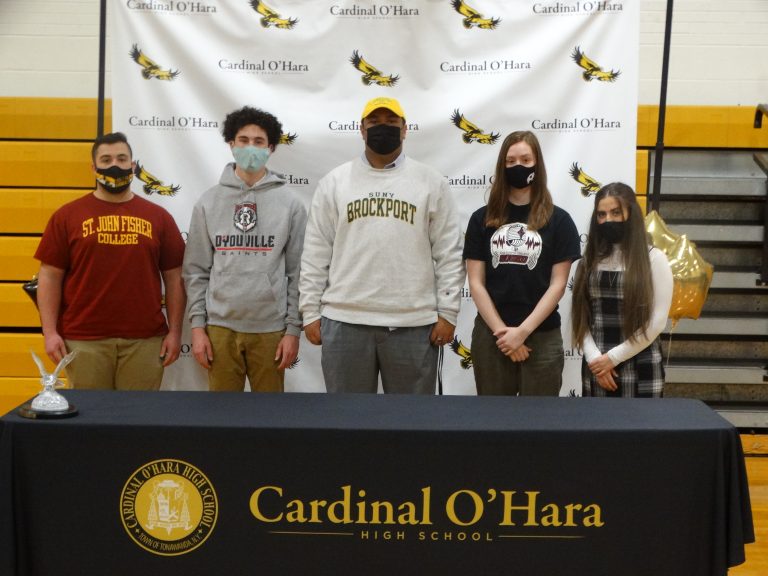 Five Cardinal O’Hara High School seniors signed letters of intent at a ceremony on Tuesday, March 30, in the school gymnasium.

Coaches, parents, the athletic director and school administrators attended, congratulating each of the five students who were recruited by their colleges.

Principal Maray Holzerland welcomed the guests and said these students exhibit the principles for which Cardinal O’Hara stands. Each coach introduce his or her honored athlete.

Track coach Robert Cathcart said that Henry Smith is not only a very talented runner but a well rounded athlete.

“Henry has been an integral player on the Cardinal O’Hara boys basketball team, track team and of course the number one runner on our Cross Country team. This year, he won it all in the Monsignor Martin Cross Country championship. He accomplished these feats while running on teams that were not complete so he had to endure some of his toughest training runs alone with no one else to push him. This speaks to the character and determination of this young man.”

“He is a member of the National Honor Society and his achievements in the classroom are worthy of the same high regard as his achievements on the sports field. I see nothing but good things in his future and believe that D’Youville is lucky to have him as a student athlete,” Cathcart said.

Henry is the son of Leonard and Rachel Smith of Lockport.

“Sam will be going to Brockport to study environmental science and ecology and play football,” Dudley said. “He has been a participant on the O’Hara football team for two years and was named first team All Catholic as a junior. Sam has brought a lot of charisma and passion to our program. He has knack for finding a silver lining in all opportunities. I am looking forward to seen his growth over the next couple of years as he has tremendous amount of potential.” Dudley said.

He is the son of Karen and Michael Torrie of Lewiston.

Luke Martinez , who will attend St. John Fisher College, has been a member of the O’Hara football team for four years, was named first team All Catholic as a junior and was praised by Coach Dudley.

“The last two years he’s been a starter and a team captain. As an underclassman, he played a significant role in helping us win the Monsignor Martin Championship,” Dudley said. “Luke is a passionate kid who loves his teammates. If you’re ever down or in need of help he always has your back. We will miss his leadership and dedication” the coach said.

He is active in the National Honor Society as well as a number of school clubs including the school band.

Luke is the son Juan and Shannon Martinez of Tonawanda.

“Sydney is a great all-around player who is very smart and knows offense inside and out,” Coach Nick O’Neil said.

A team player, the coach noted she is an important part of the team and was critical to the overall success of the girls basketball team, that his year marked the third consecutive year that Cardinal O’Hara has won the Msgr. Martin Girls Basketball Championship.

“She helps coaching and hopes to coach someday,” O’Neil said. “She’s a team player whose hard work and dedication are one of the best I’ve ever known.”

Sydney is president of the National Honor Society and active in many clubs at O’Hara.

She is the daughter of Glenn and Kimberly Mountain of Youngstown.

“Gianna keeps on top of the action and I have 100 percent confidence in her. A member of the varsity team for three years, she is an important part of the team. She’s a hard worker with a nice jump and good offensive skills.” he said.

O’Neil added that when called upon, Gianna plays hard and was critical to the overall success of this team.

Gianna is the daughter of James and Cynthia Padula of Kenmore.